The History of Woolworth’s Five & Dime

The unique history of Woolworth’s is one in the same with the Lofts at the Five and Dime. That is because, the lofts are housed upstairs in Clarksdale’s old Woolworth’s Five & Dime. Woolworth’s was an integral part of Downtown Clarksdale for many years.

F.W. Woolworth store was one of the first stores in downtown Clarksdale. It opened in 1924 at 228 Yazoo Avenue. While Clarksdale has never had an official “Main Street,” Yazoo Avenue served as the hub of variety, department and clothing stores. As a result, in 1955, the 200 block of Yazoo Avenue was packed with more than a dozen such stores. The Woolworth building was the anchor on the northeast corner. 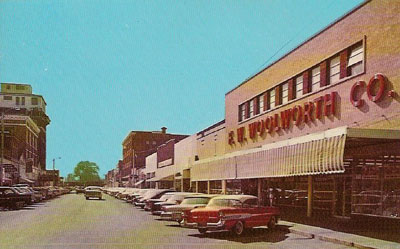 Yazoo Avenue in the 1950s was the center of Clarksdale’s bustling downtown. 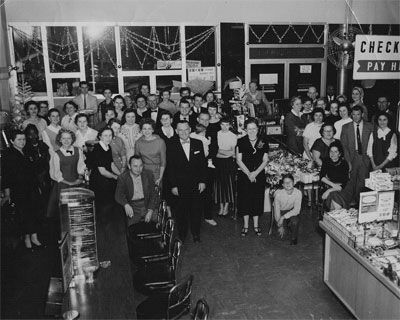 Employees inside the new, modern Woolworth’s building in the mid 1950s.

The store moved to 207 Yazoo on October 26, 1955. On the eve of the new store’s opening, the entire front page of the Clarksdale Press Register was devoted to the new store. The paper cited the “handsome new $200,000 F.W. Woolworth store in the heart of downtown Clarksdale,” as being “one of the most modern in the vast Woolworth chain.” The new building was a classic example of the modern, international style of architecture popular at the time. The 27-stool lunch counter (a signature component of Woolworth stores since the 1940s) was one of the modern additions to the new store. The Woolworth lunch counter served as a common meeting place, but Woolworth lunch counters will be long remembered as the site of civil-rights sit-ins in 1960.

Unfortunately, the wheels of change turned much more slowly in Clarksdale. The N.A.A.C.P.’s Coahoma County Youth Council members started “demonstrating” at Walgreen’s and Woolworth’s during the spring of 1960. No “sit-ins” were permitted since, after consulting the N.A.A.C.P. national office, it was

agreed that the youth didn’t have enough experience, planning or resources to properly conduct a sit-in. Therefore, a group of youths held a “shopping tour” at Woolworth’s instead. Their appearance drew comments, stares and, eventually, police attention. As a result of this and similar occurrences, the Clarksdale Woolworth’s had shut down its lunch counter by late 1963.

The Woolworth building was listed on the National Register of Historic Places in March, 2009. The Lofts at the Five & Dime — which are housed in the upper level — opened in 2010.

The history of Woolworth’s Five and Dime represents the heyday of commercial prosperity and development in Downtown Clarksdale, and serves as a reminder of what it once was and is working to become again. If you’re looking for things to do or just curious as to what progress Downtown Clarksdale has made, check out our Things to Do page!